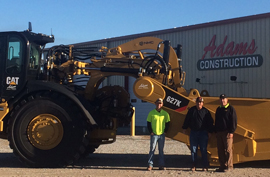 Moving the earth since 1946 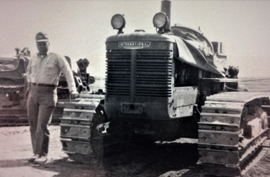 Adams Construction began in 1946 by Don Adams after serving in the Army during WWII. His name was drawn for a chance to bid on a WWII track-type tractor in Saint Louis, MO. He was lucky enough to get the bid and even luckier when he found out that this tractor had a dozer with it. Don got the tractor back to Arapahoe, Nebraska, and his first job was clearing trees for the veterinarian that loaned him the money to purchase this tractor. Don and his wife, Lila, worked diligently and tirelessly growing their business. In the mid 1980’s sons, Mike and Merle, and son-in-law, Doug Snyder, joined the business which had now grown to around 40 employees. Don and Lila semi-retired in 2000 when Mike assumed the leadership role. After Mike lost a battle with brain cancer in 2015, Doug assumed the leadership role with Merle still involved in the business too. Now the business continues into the 3rd generation as Adam Snyder, grandson of Don and Lila, is now avidly involved in the family business and hopes to take it over in the coming years.